This is the first mermaid craft I've ever done with my kids and I love how it turned out! 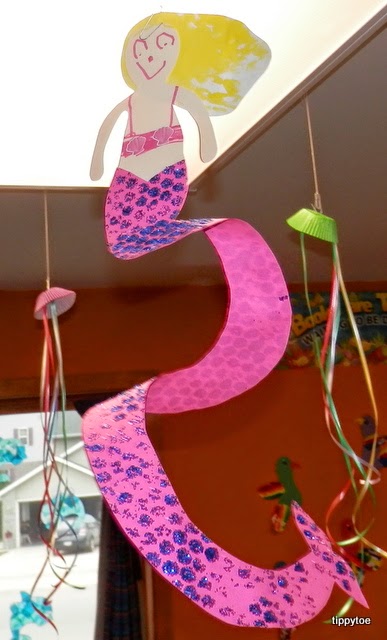 I had three inspirations that I combined to make ours. I liked the handprints for hair that I saw on Pinterest (without an active link), the body is from Follow the Stray, and the long twirling tail is from Let's Play Music. I did have to change it a bit, though, to fit the bigger body. I made the waist bigger and had it dip down in the middle. I traced my new template onto colored paper. It's just regular paper because I didn't know if thicker paper would hang down after cutting it. For the fish scales of the tail, I had the kids paint bubble wrap with glue. 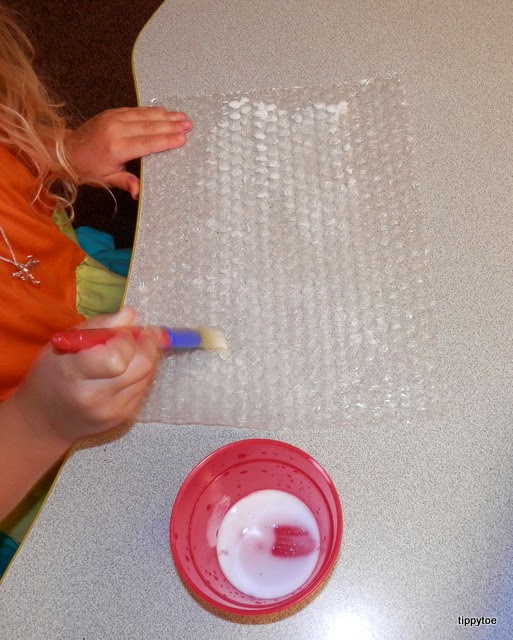 Then I flipped it over onto the back of the colored paper. (This way when I cut it out, I'd be able to see my lines because it wouldn't be covered in glitter. I was thinking ahead!) They gently pushed down on the bubble wrap to transfer the glue to the paper. 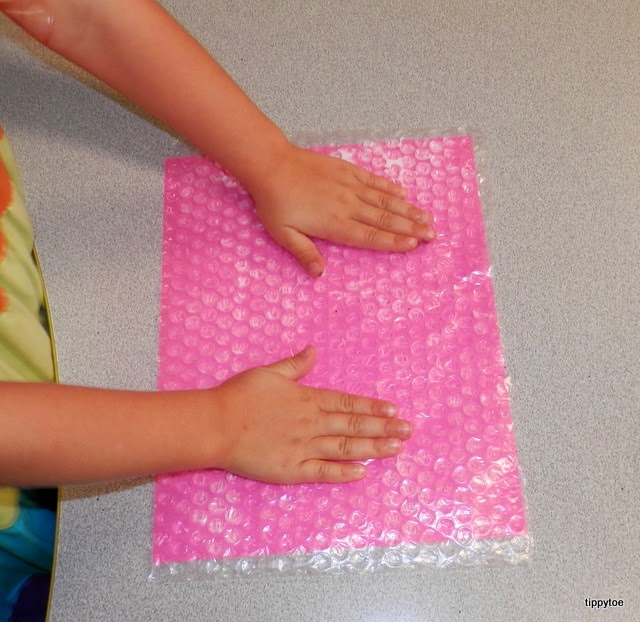 Then I carefully peeled the bubble wrap off and placed the paper into a box. (Again, thinking ahead!) The kids picked one color of glitter and dumped a whole bunch into the box. 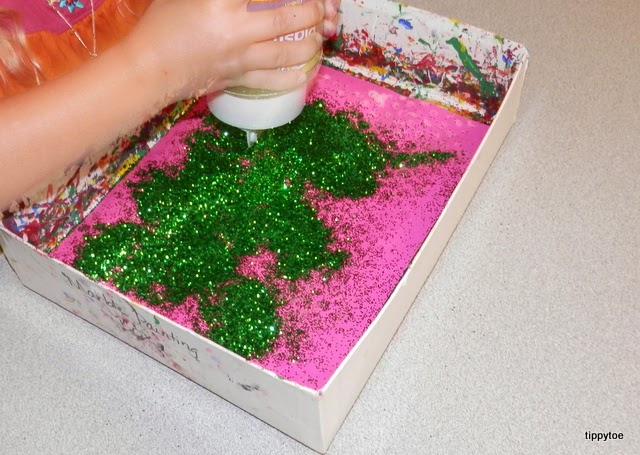 Then I took the paper out and very easily dumped the extra glitter back into the container. Of course, we still managed to get glitter all over, but it wasn't nearly as bad as it could have been had we not used the boxes. 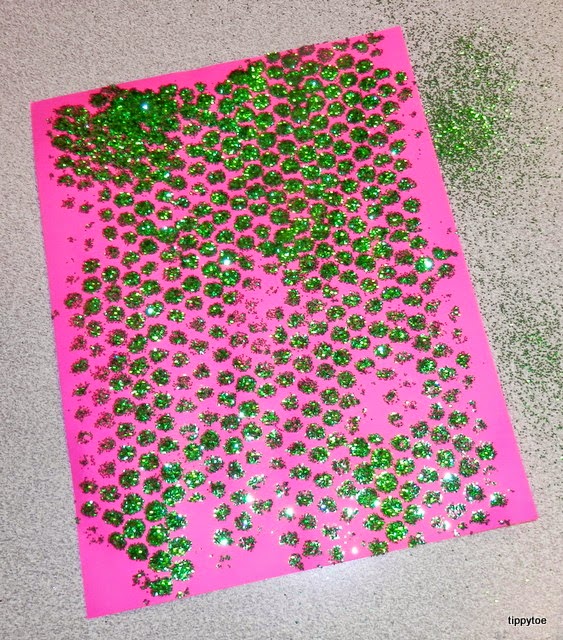 After a few kids made these, I realized we didn't need that much glitter. We could just shake the box a bit to make sure the glitter moved around and covered all the dots of glue. 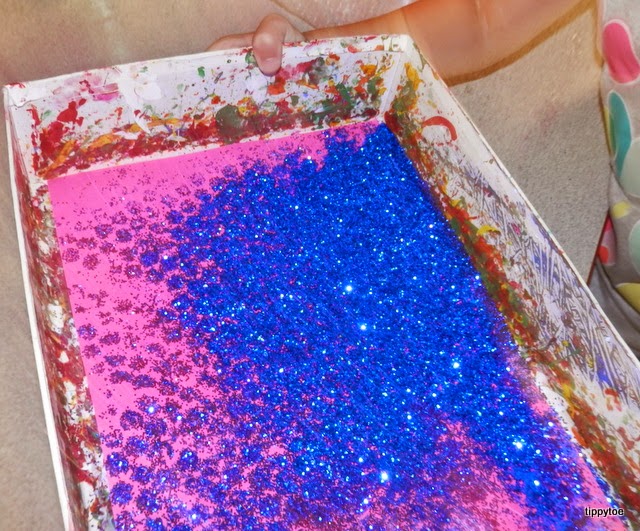 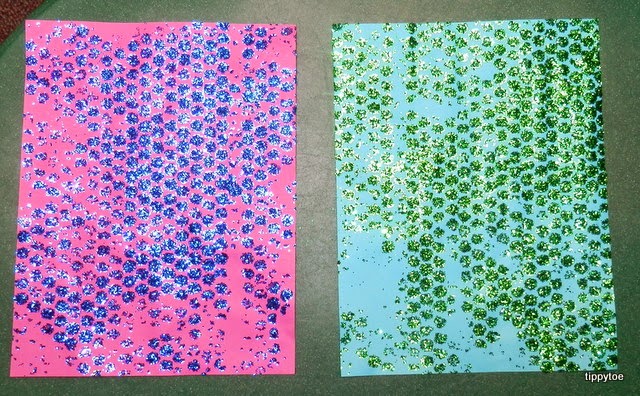 You can reuse the same bubble wrap for each child. Just have them add a fresh layer of glue!
When they were dry, I cut them out. Glitter went EVERYWHERE! And it was a little tough to cut through the glittered glue. My hand was getting sore. But it was worth it. 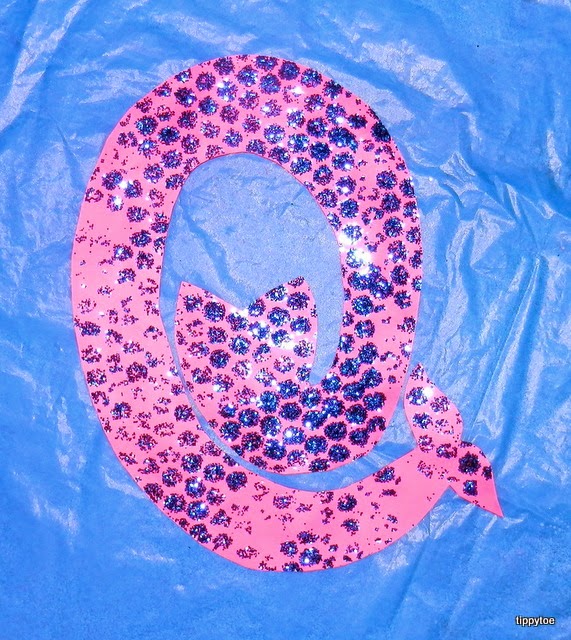 Now for the body. I used the template I shared above, but cut off the hair and tail. I traced it onto cream-colored card stock. The kids decorated them with markers. I showed them how to easily make a bikini top. 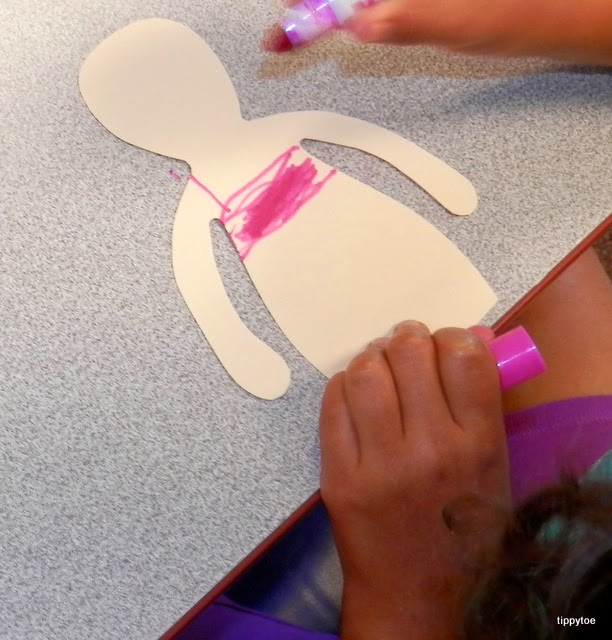 They picked out seashells from this sticker book that I got for one dollar at Michaels. 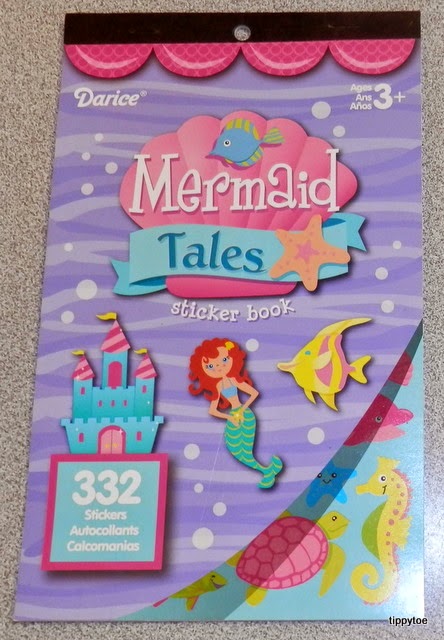 They added them to the bikini top. They could also make necklaces and other jewelry if they wanted to. And they added a little hair on top of the head so the mermaids wouldn't be so bald in front! 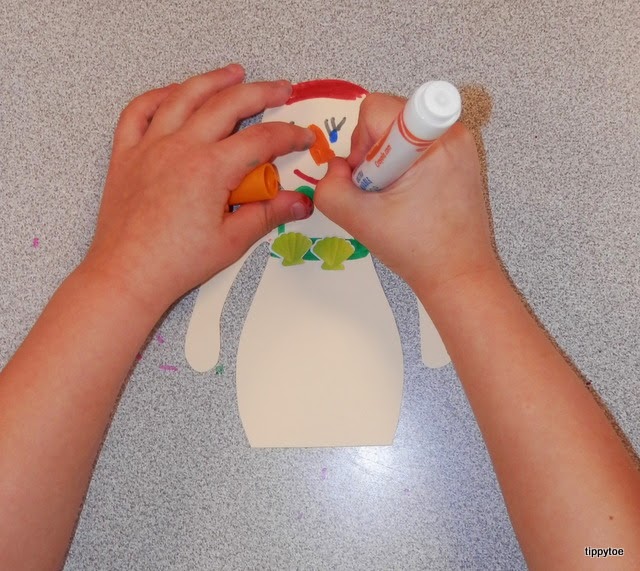 As for the hair, each child picked out a hair color: yellow (blonde) or red/orange. I also had brown and black available, but no one chose those. I painted the child's hand (minus the thumb) and made several prints by just moving the hand slightly each time. (I found that just one handprint didn't really look like hair.) 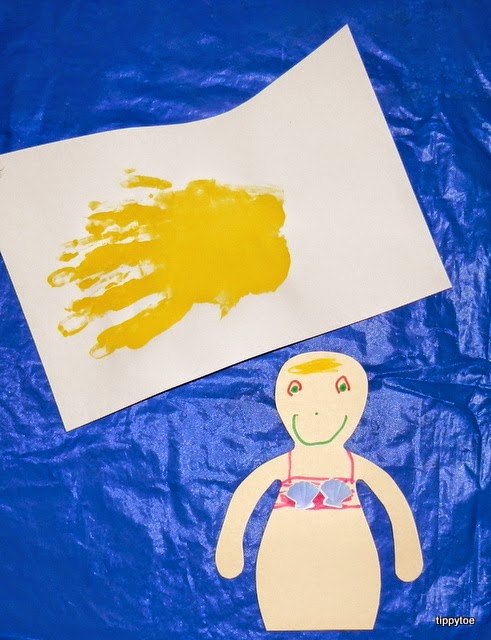 I cut it out and glued it to the back of the head so it looked like it was floating in water. 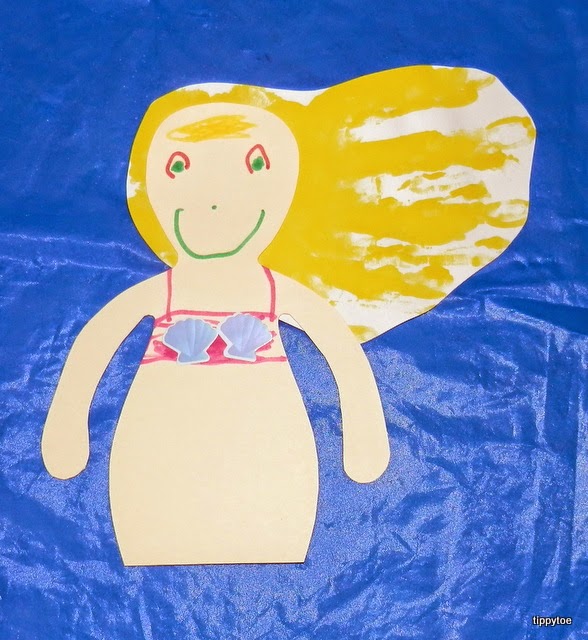 Then I glued on the tail. 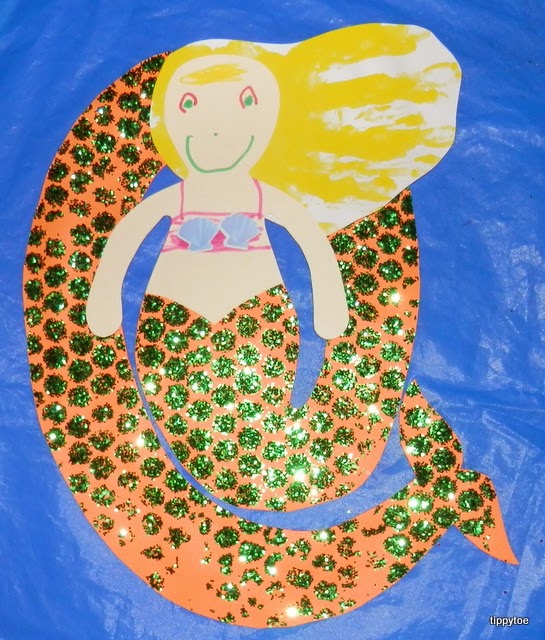 The back looked a little undone, 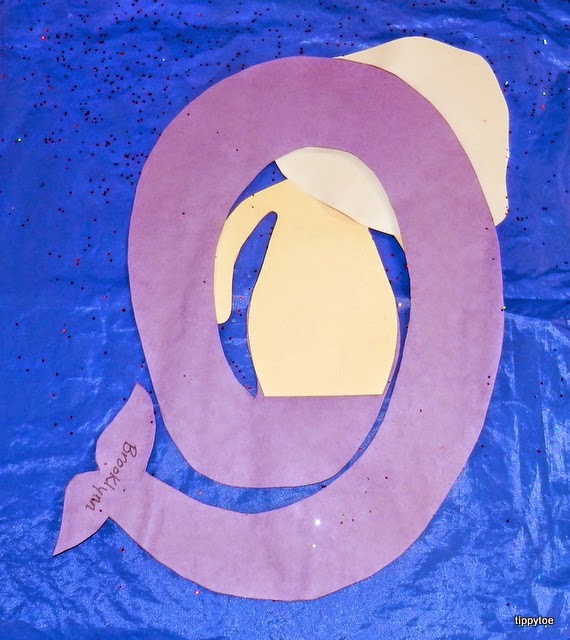 and since I was planning on hanging these, I decided to add a little piece of paper to the back to give it a more finished look. I just glued on paper of the same color, with a little "scoop" at the top, and trimmed it to fit the tail. 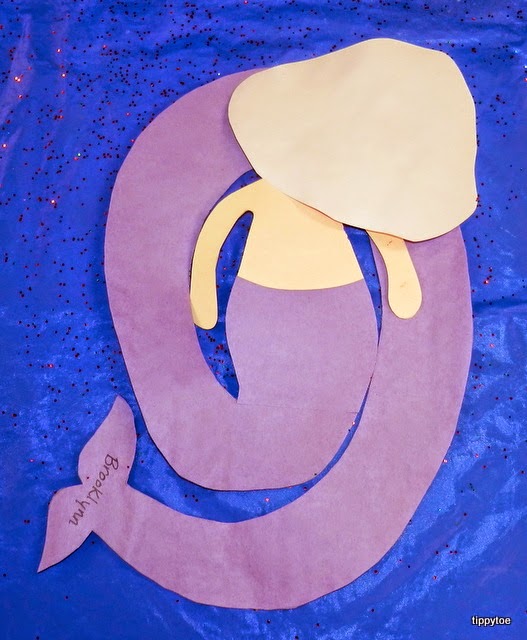 Here are our finished mermaids (and one merman!): 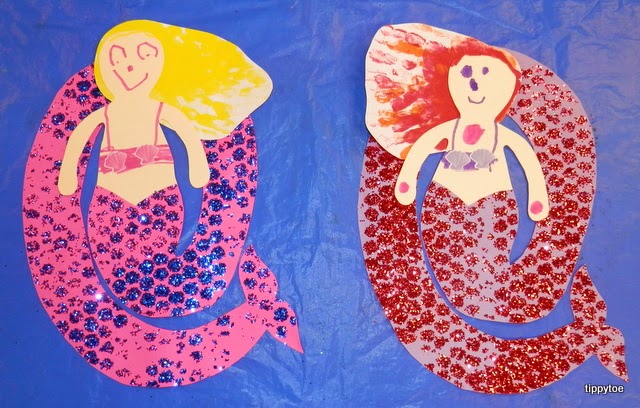 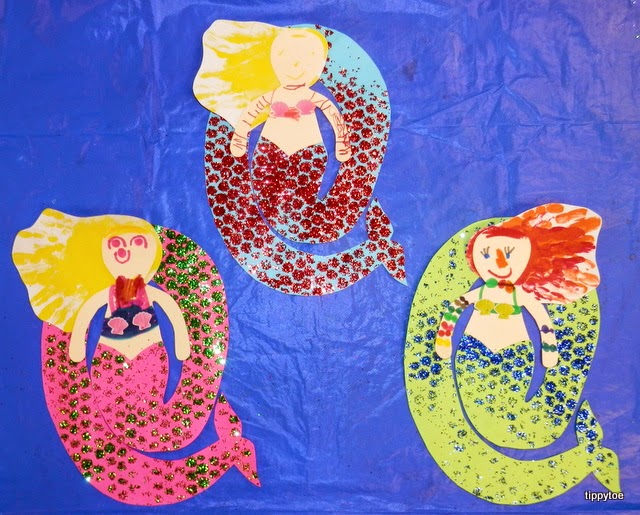 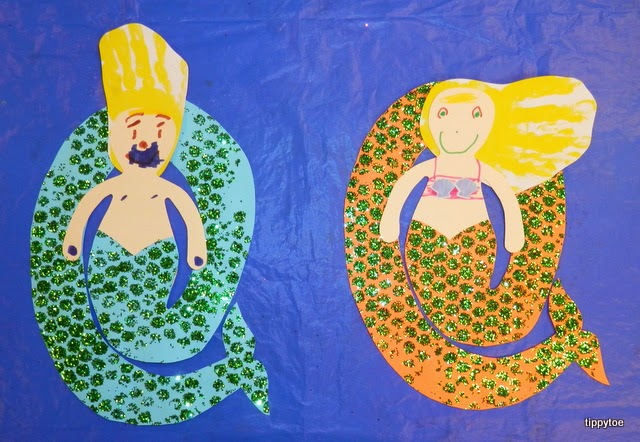 For the merman, I just used one handprint and glued it on straight up. It was the child's idea to add the nipples. After all, he said, "Boys have nipples, too." 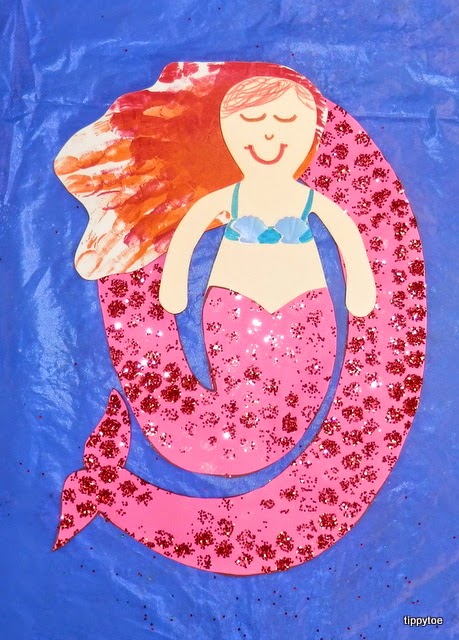 That's mine (with kid handprints for hair) because I couldn't resist getting in on the fun, too! Besides, I had to make sure the glue-on-bubble-wrap thing worked before the kids went through all that trouble.
I hung them from the ceiling with our cupcake liner jellyfish. They look so cool twirling around! 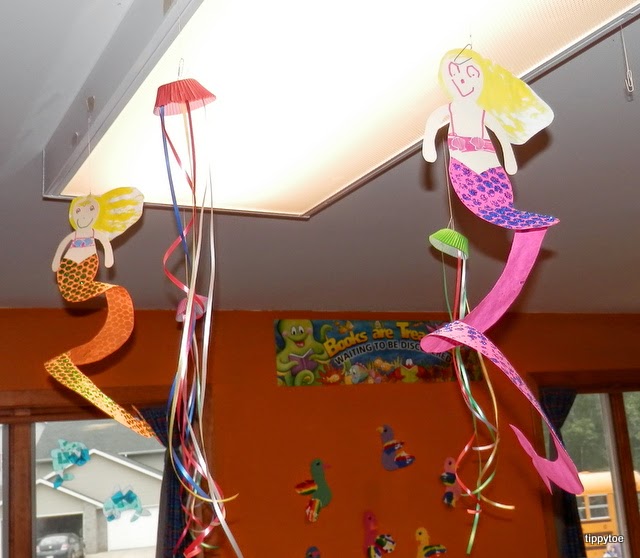 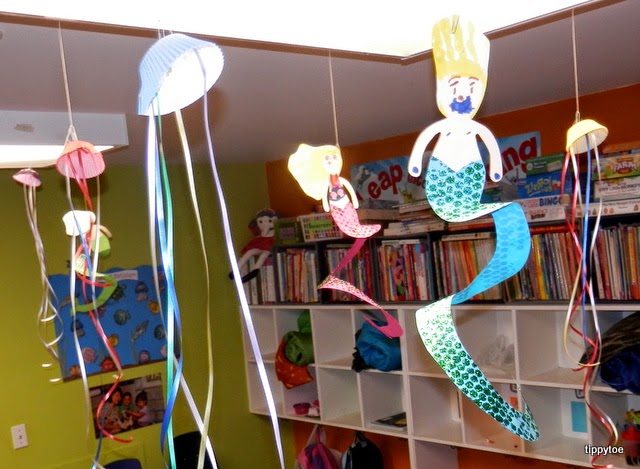 The kids oohed and ahhed when I showed them their finished mermaids. I think the glitter-dot tail really sets them apart from any other mermaid craft I've seen out there.
Posted by Betsy at 10:13 PM