Yesterday was the last day of school for me and my daughter. I mentioned in my last post that my center was changing ownership at the end of the month. It's getting a new name with all new staff. It was quite an emotional day, to say the least. I wanted to give each and every one of my coworkers a little something to say thank you. I came up with this: 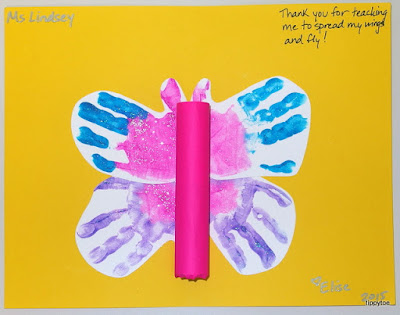 There's actually a little treat hidden inside, which I will get to later. I used glitter watercolor paint that is thicker than most watercolors. (I bought them on Amazon.) My original plan was to make one butterfly at a time on white paper. But after my first trial run, I realized that wouldn't work. 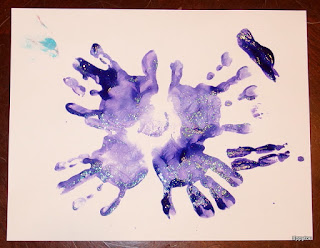 I had missing fingers or too many fingers or globs of paint in weird places. So then I decided to just have my daughter make a bunch of handprints that I would later cut out. 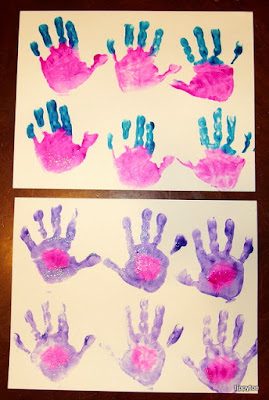 We made about 20 the first day and probably over 30 the next day. I had a few extras, but that's what I wanted so I could pick and choose the best ones. After cutting them out, I glued them to a piece of cardstock. For the body of the butterfly, I rolled up a pack of Rolos in colored paper and used double-stick tape to keep it closed. I did not tape the paper to the pack of Rolos. 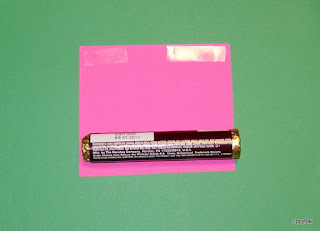 Then I used double-stick tape to attach the roll to the middle of the butterfly, covering up the bottom thumbprints. 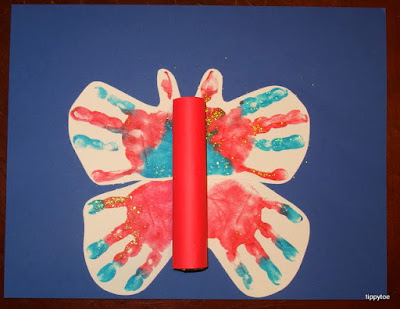 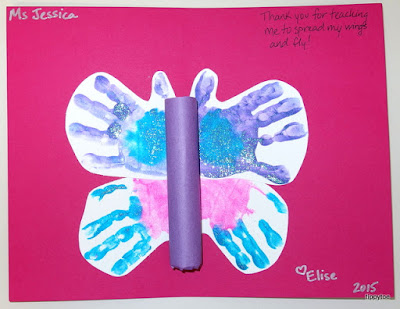 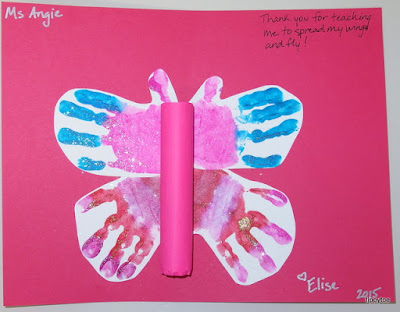 The pack of Rolos easily slides out, and the butterfly body remains intact. 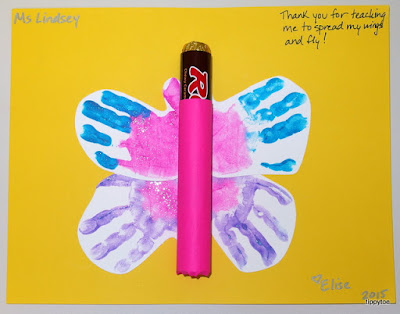 I scrunched the paper at the end of the body just a bit to hold the Rolos inside when the paper is held upright. 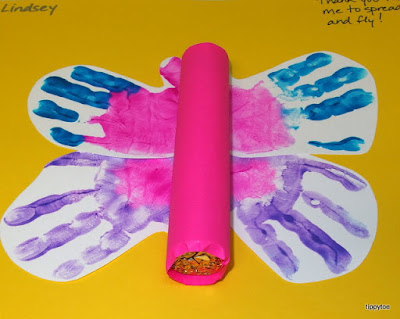 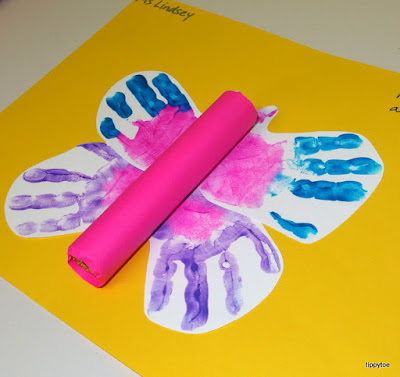 And after the teachers eat the treats, they still have a little keepsake from my daughter. I worked with a wonderful bunch of women and I will miss them greatly! They were not just coworkers, they are, and will always be, my family. 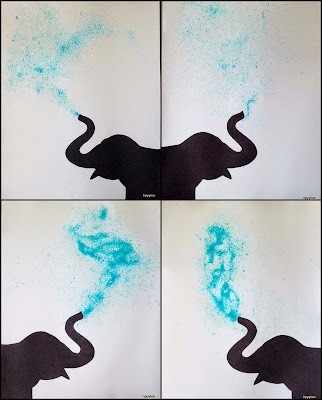 Our theme this week is The Zoo. Believe it or not, in all the years I've been teaching I've never done a zoo theme. I usually teach animals by habitat or class. But I like the zoo theme because I can teach about my favorite animals from all around the world! Today's animal was the elephant. I saw some melted crayon art on Pinterest, where they had a silhouette of an elephant and the melted crayon was water spraying from the elephant's trunk. I knew melting crayons would be hard to do in my classroom, so I decided to use blue kool-aid. I've always loved my previous kool-aid art projects, so I was looking forward to this one. But my grocery store was all out of blue kool-aid, so I picked up a box of blue jello instead. It worked just as well! I set the elephant silhouette (using this as my template) on the paper so the kids could get an idea of where to put the jello powder. They started by sprinkling a little bit by the trunk and then went up from there. 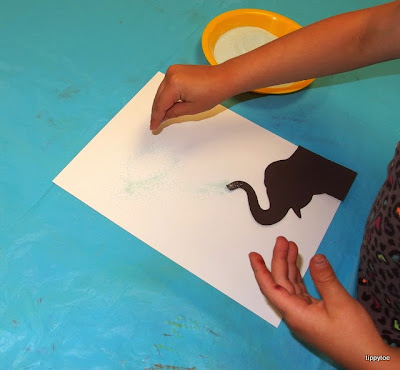 Then I took the elephant off before the kids sprayed their paper with water. 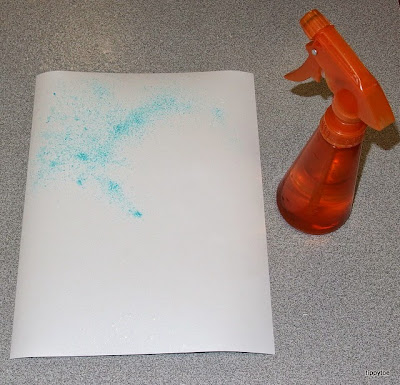 When the paper was dry, I glued on the elephants. So simple! 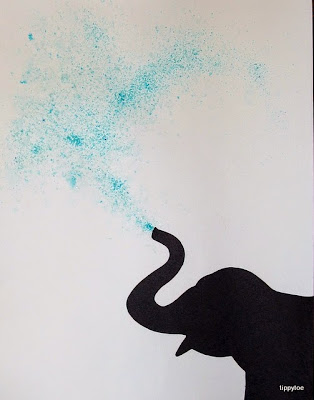 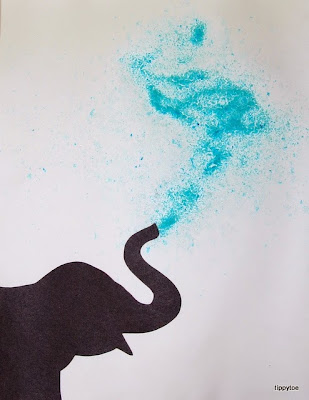 I invited another class to do this as well since I had so much jello. I love how they turned out! 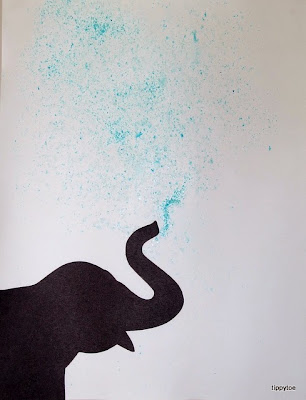 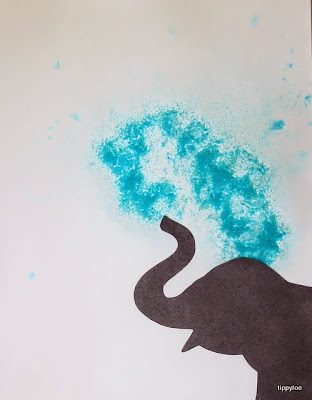 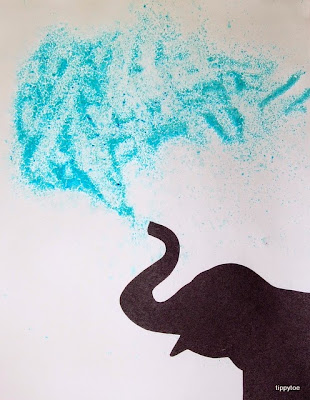 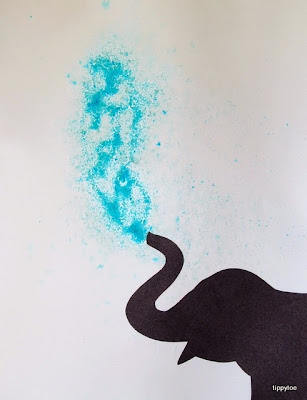 I displayed some on my door: 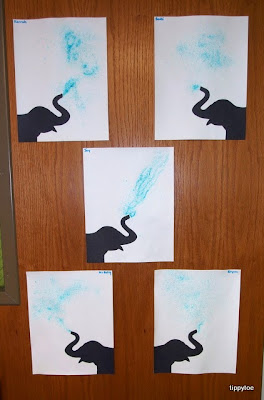 They are a bit sticky, but not too bad.
And now for a bit of sad news. I mentioned in my last post that my boss sold our center. Well, the people who bought it are changing it to a different child care and I decided not to take a teaching position with them. I will be spending the summer with my daughter and perhaps another child from the neighborhood. I'll still be doing crafts, of course, but they will be for toddlers, not Pre-k. Although, I do have a bunch of projects from past years that I never got around to blogging about so I might sprinkle those in as well. I hope you still tune in to see what we do!

Fun Fact: When stretched out, an African elephant's ears are the shape of Africa.
Posted by Betsy at 10:25 PM 4 comments:

I have a very special display to share with you this evening. When I first had the idea it was just going to be another bulletin board or door display, but it's turned into so much more. I started out by having the kids in my class make handprint flowers on a huge sheet of white paper. 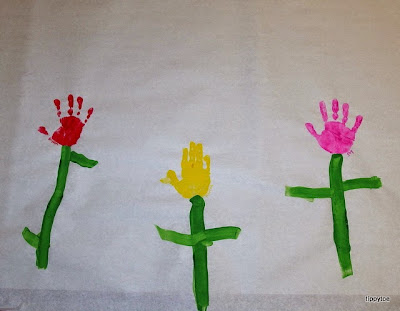 Yes, I only had three kids that day. I have an extremely small class right now. So I decided to get the handprints of the 3-year-olds across the hall from me. I also painted in some grass at the bottom. 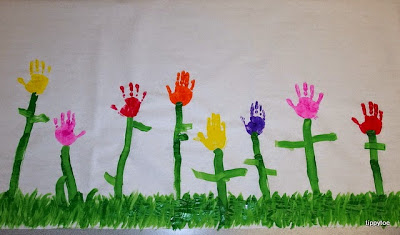 Then I thought I might as well get the handprints of the kids from other classes, too. So the 2-year-olds added theirs, and then the 5-year-olds. 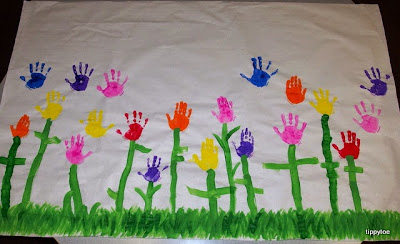 In the picture above, some of the stems hadn't been painted in yet. All the kids made their own stems except for the 2-year-olds, which were painted by one of my 4-year-olds or me. And the kids had to get a little creative with their stems because they had to avoid painting over someone's handprint! I wish I could have gotten prints from the infants and toddlers, but it would have been too tricky. If I had thought of it before I started, I would've done their prints first and made the white paper much bigger. But I still love how it turned out. I titled the display, "Love Grows Here" and hung it at the end of a long hallway. 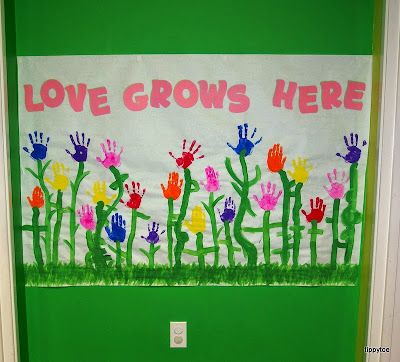 I wrote each child's name next to their handprint using a marker of the same color so it kind of blended in. 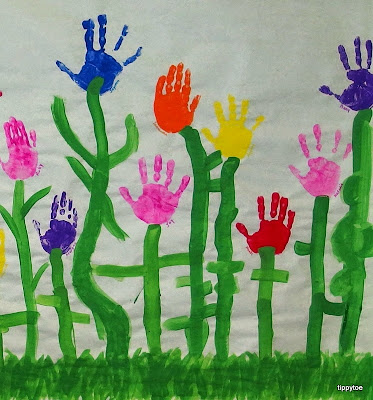 I even got my daughter's handprint. She moved up to the 2-year-old room about a month ago and hers is the smallest flower. It's so cute! 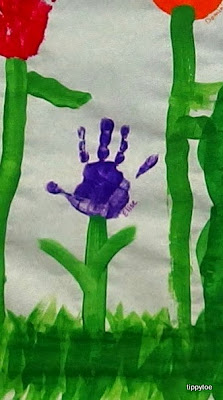 Now, the reason why this display is extra special is because our center is going to be changing ownership in a couple weeks. The current owner cried when she saw this in the hallway. It reminds everyone that we are still a family, no matter what. Even if we all end up going our separate ways. Our center is filled with love. 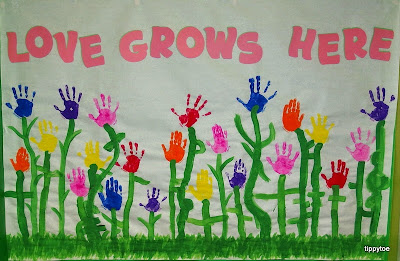