To finish up our bird unit, we learned about ostriches. The art project was another simple one. I printed out a coloring page of an ostrich and the kids colored everything except the feathered body. Then they used ink to make fingerprints on the body. 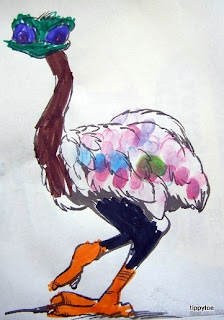 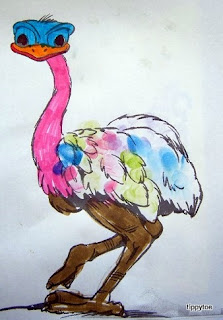 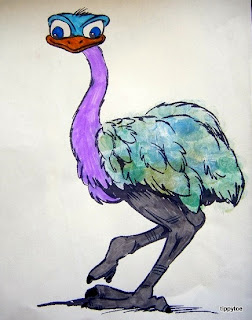 Fun Fact: Ostriches do not bury their heads in sand. They like to lie low when in danger. They press their necks to the ground in an attempt to become less visible.
Posted by Betsy at 9:06 PM No comments:

After learning about song birds, and particularly cardinals, the kids made their own cardinals using their foot and hand prints. I traced everyone's foot (no shoes, just socks) on red paper, then they made hand prints with red paint on white paper. The heel of the foot would be the head, and the toes of the foot would be the tail. The hand prints would be the wings. I also provided beaks, legs, wiggle eyes, black "splotches" to go behind the eyes and beak, and red feathers (for the crest). The kids glued everything together on white paper. 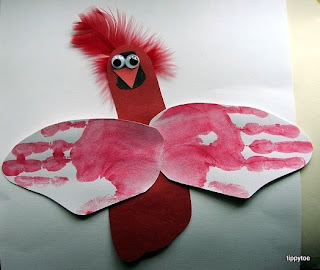 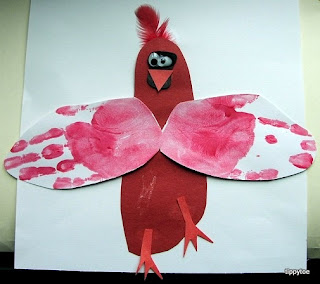 Then they used markers to add a background. Here's how they turned out. These kids are so creative! 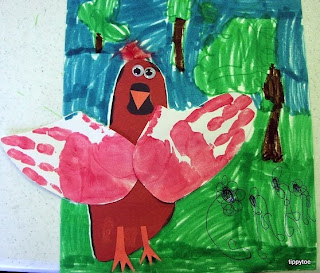 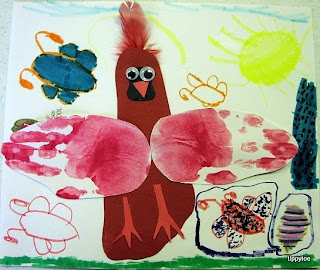 How cute are these guys?

Fun Fact: The male cardinal is the defender of their breeding territory. They have been known to spend hours "fighting" their reflection in glass surfaces!
Posted by Betsy at 10:26 PM No comments:

Hello again! I have more bird crafts to share with you. I taught the kids about flamingos on Wednesday and then they each made their own. I drew a flamingo body (sans legs) free-hand and two webbed feet. Then I put out every shade of pink crayon that we have -- about 15. (We have the 120-count box of Crayola crayons and no two colors are the same. They also have crazy names, like Screamin' Green, Macaroni and Cheese, and, very fittingly, Pink Flamingo.) The kids colored their flamingos using as many shades of pink as they wanted. I also put out a black crayon for the beak. Then they added an eye and I cut everything out. 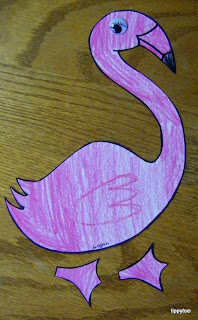 They picked out a pink pipe cleaner (I had three different shades) and I cut it in half. Now, I'm not a fan of glue and pipe cleaners. It never turns out well. So I went with clear packaging tape. Love that stuff. Anyway, the legs were taped to the back of the body and the feet were taped to the bottom of the legs (using very skinny pieces of tape). 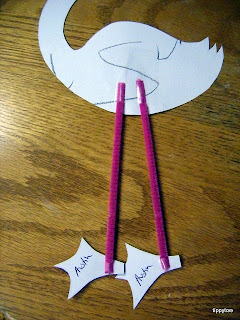 Then the kids picked out a pink feather, just to add a little somethin', and that was also taped to the back of the body. 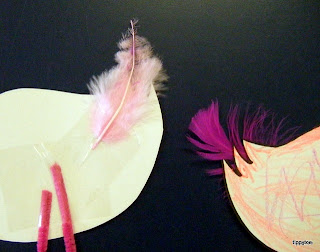 See how it just adds a bit of fun? When I displayed these around the room, I put some of the legs in walking positions and some in resting positions (with one leg up). 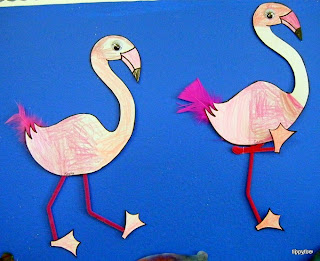 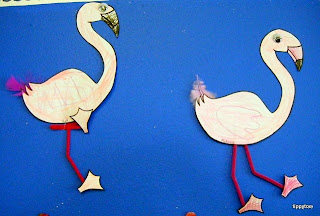 They look so good on our blue wall! 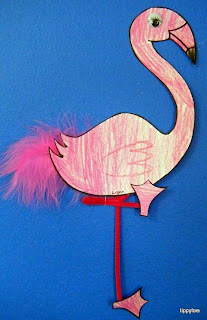 Last year I made them twice as big and the kids put a pink handprint on the body for the wing. I loved it but was trying to use less paper this year. 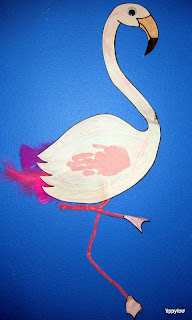 I do like my beak better in last year's drawing, though. It's more curved in at the tip, the way it should be. I have to make sure I do that next year.
So there you have it! Pretty in pink!

Fun Fact: A flamingo's "knee" is actually its ankle bone. They stand on their toes, like many birds, so it looks like their legs bend the opposite way as humans.
Posted by Betsy at 9:56 PM No comments:

Here is a spring craft we did yesterday. Our theme this week is birds, but I still like to throw seasonal crafts in now and then. We made cherry tree blossoms. They turned out so pretty! First the kids painted a tree with brown paint, then they crumpled up small pieces of pink tissue paper, dipped them in glue, and put them on the tree. So simple, so fun, so beautiful. 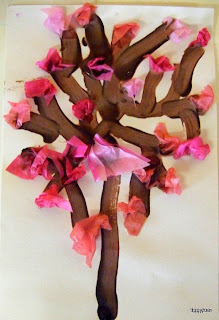 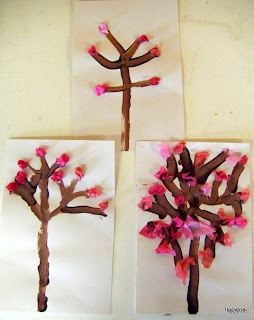 Another bird we learned about this week was the peacock. The art project was so cute. First the kids colored a coffee filter with markers and I sprayed them with water. While that was drying, they put together the body. I just cut one free-hand. It reminds me of a short bowling pin. They glued on a beak and eyes and picked out some cocktail toothpicks for the crest. Those are taped on the back of the head. 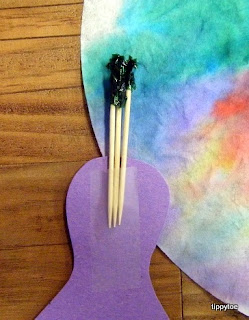 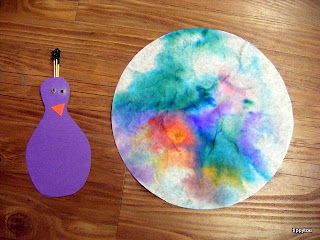 When the coffee filter was dry, they glued the body to it. Then they picked out two colors of paint for the eyespots on the feathers. In one color, they dipped in their thumb and made thumb prints on the coffee filter around the peacock body. In the other color they dipped in their pinky and made pinky prints inside the thumb prints. I got the idea for the fingerprint eyespots from DLTK. 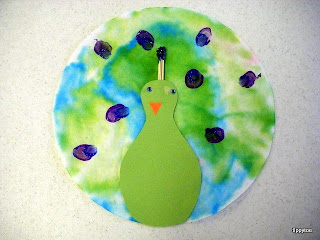 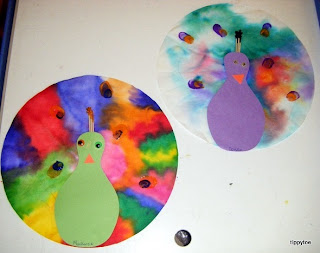 In the past I've also had legs available for them to glue on, but I didn't do it this year. 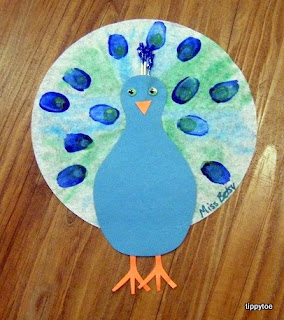 And that's our peacock craft! What do you think?

Fun Fact: Peafowl are among the largest birds that can fly. The males are peacocks, the females are peahens, and the babies are peachicks.
Posted by Betsy at 7:07 PM 9 comments:

This week we are learning about birds. On Monday I taught the kids all about hummingbirds. We did a very simple art project. I found a coloring page that I liked and made copies for the children. I put out oil pastels for them to use because they are so bright and rich in color. Then they put some glue on the throat of the hummingbird and sprinkled glitter on it. 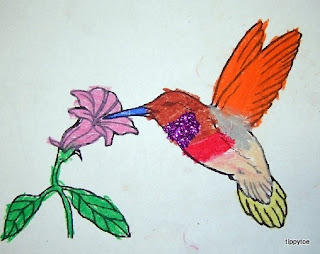 In the past I've cut these out and hung them on our windows. They look really pretty and bright with the sun shining through. However, right now our windows are filled with other projects, so I just sent these home when they were dry. The kids learned that only the males have the sparkly gorgets, so some of them wrote "dad" on their paper. Very cute. 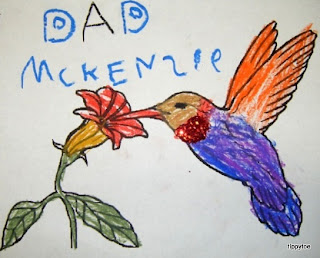 Fun Fact: Hummingbirds flap their wings 50 times every second!﻿
Posted by Betsy at 10:12 PM No comments:

Welcome to my classroom

Well, this is my first post. I can't believe I'm a blogger! I hope to share my ideas with many people, but if it turns out I'm just talking to myself, then at the very least all my ideas are organized in one place.
I thought I'd start out by showing you around my classroom. Maybe you'll see something you can use in your own. First up is our helper board -- better known as "Hoppin' Helpers." (I have a thing for frogs. Actually, that's a bit of an understatement. I'm OBSESSED!) 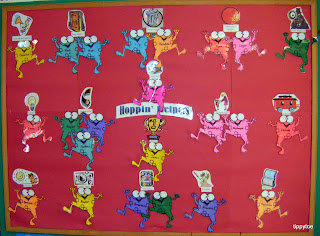 The jobs included are:
Every week the kids (whose names are on frogs) get a new job. I started out buying a pack of frogs from a school-supply store, but now I make them myself. The job pictures are printed out from a greeting card program I own.﻿ Notice I said "gets to" a lot in the descriptions of the jobs. Yes, children love being the caboose (instead of just being last in line) and they love being floor detective to pick up that one toy! They really take their jobs seriously!


Frogger: Whenever we leave the classroom, the frogger gets to move the frog to one of the lily pads, depending on where we are going. 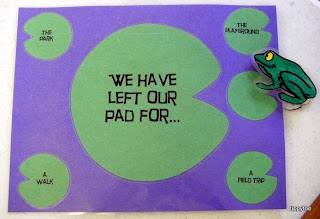 The choices are the park, a walk, the playground, and a field trip. I left one lily pad blank in case we go somewhere other than those four places. And because it's laminated, I can use a dry erase marker and just wipe it off when we get back! The frog is just a picture I colored and attached to a clothespin. There is another frog on the flip side so it can be used on the left.

All Star: Our All Star is our special student of the week. They are allowed to bring in games or toys from home to share with the class. They can also bring in pictures for our bulletin board. 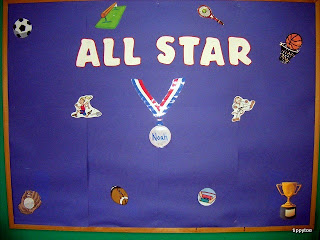 For the second round of All Stars, we send cards home that the kids fill out with the help of their parents. These include "My favorite thing about Pre-K," "My pets or favorite animals," "Something about me the class doesn't know," and "When I grow up I want to be..." The kids can color, write, cut out pictures from magazines, or use real photos. Then we share them during circle time and hang them on the bulletin board for the week.

Next up is our Star Students board. When we catch someone doing something nice for a friend or teacher, or doing an extra great job listening and following the rules, they get a star on the star chart, which is a small dry erase board. 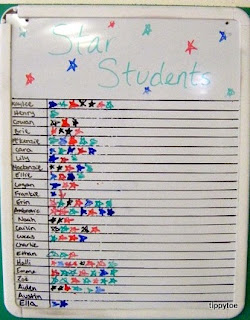 Once they get eight stars, they can pick something from our treat bucket. It could be a pencil, small toy, sticker, tattoo, or small candy. We even put in happy meal toys that parents donate! Once the child picks their prize, their eight stars are erased and they start over again. The best thing about that is no one can tell who gets the most stars. Someone who only has 1 could have just started over. So it's a great way to cut back on competitiveness.﻿

And the last thing I want to show you is our birthday display. 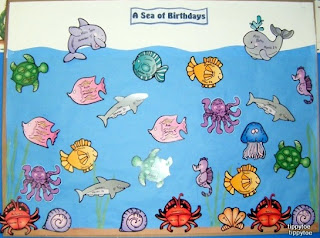 I bought a pack of sea creatures from a school-supply store and wrote the kids' names and birthdays on them. Then I made some seaweed and a sandy bottom and applied them to blue paper. It's our own sea of birthdays!

I think I will end here. I've been working on this post for two days! In the days to come, I hope to share lots of art projects and other Pre-k actitivies with anyone who's willing to listen read. Thanks for stopping by!