My daughter is very into monsters lately, as long as they are cute and friendly! Last year at her day care she made a monster with candy corn teeth (similar to this one from Crafty Morning), but I didn't save it long because of the candy. So when I found these craft candy corn pieces at Hobby Lobby, I thought we could make another monster with them and be able to save it with the rest of our Halloween decorations. 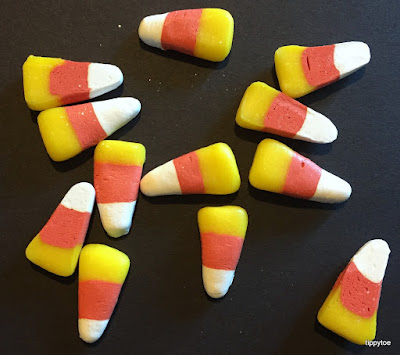 She and a friend made their own monsters. I asked what color they wanted for the body, horns, arms and feet and cut everything free-hand from construction paper. They glued on all the pieces. I set out a bunch of wiggle eyes for them to choose from, as well. 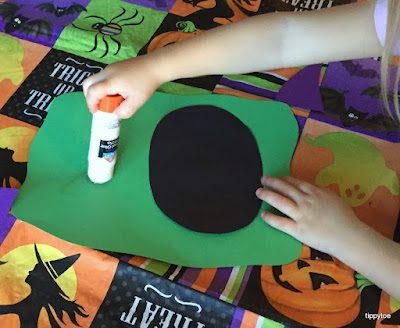 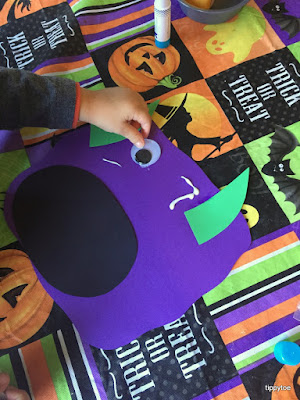 Then I put dots of glue inside the mouth for the kids to place the fake candy corn. 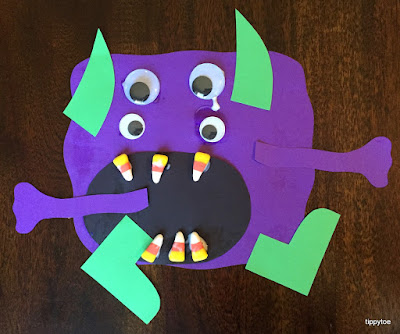 I love how they turned out! 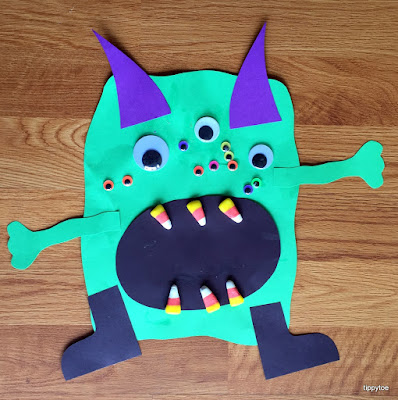 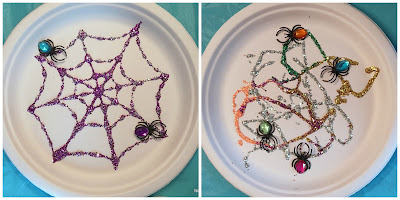 I found these jeweled spider rings at Target and I thought they'd be cute for a spider web craft. Plus I knew my daughter would love wearing them. 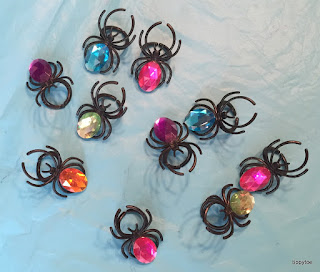 We used sturdy paper plates for this craft, but any thick paper would work. Start by making your web with Elmer's white glue. 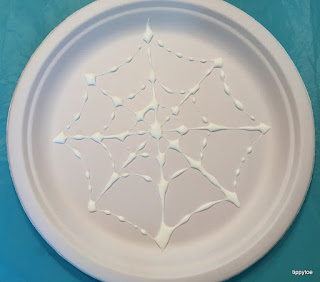 Younger kids can just put a bunch of glue on their plate any way they'd like. Then shake on the glitter. 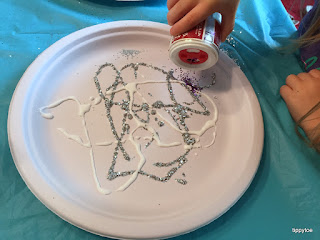 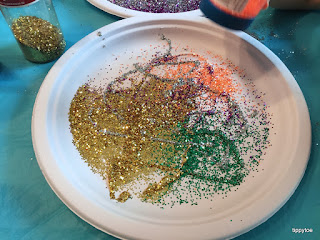 This is where the paper plate really came in handy. It helped contain the glitter. You can even shake it around on your plate to make sure all the glue gets covered. 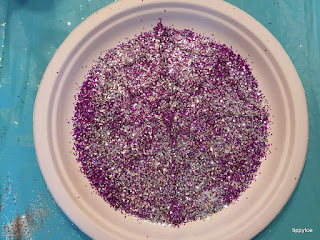 Then quickly dump the excess glitter in the garbage or another container if you wish to save it. Now it's time to add your spiders! I cut off the ring parts of the spiders so they'd be flat on the plate. I also used glue dots, but regular glue is fine, too. Wait for the glue to dry and your sparkly spider web is complete! 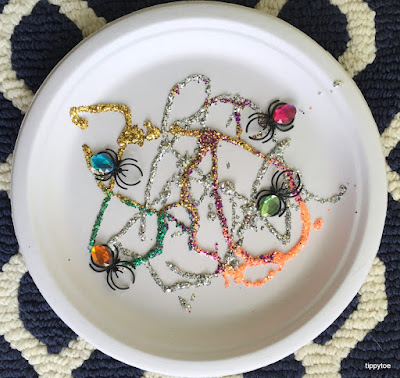 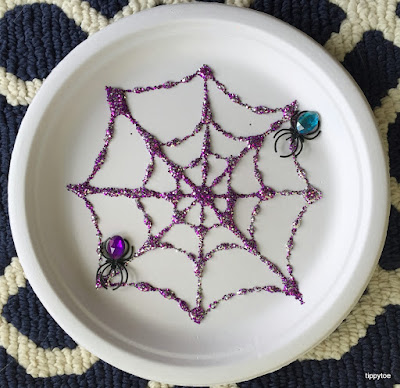 I'm thinking of punching a hole in the top and putting string through so I can hang them somewhere. They're cute halloween decorations!
Posted by Betsy at 9:49 PM No comments:

Since I had so many buttons left over from our fall tree craft, I decided to use some orange ones in a pumpkin patch craft. 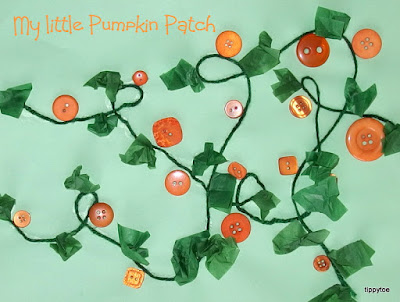 First you use glue to make some squiggly lines on green paper. 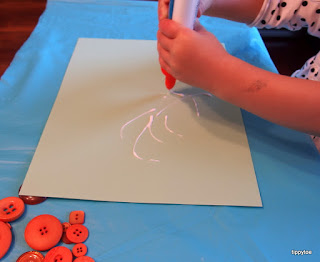 Then you put green yarn on the glue. 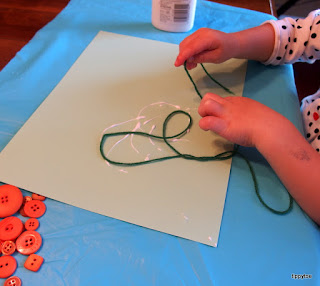 My daughter is only 2 so she didn't really line up the yarn on the glue, but I just waited for her to put the yarn where she wanted it and then squirted some glue under the yarn in a few places. Older children might be able to follow the glue line with their yarn. 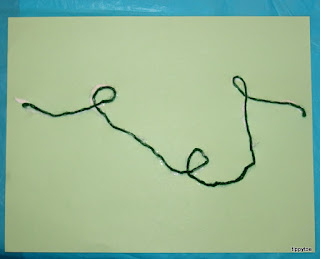 Then glue on orange buttons of all different sizes. You can follow along the yarn or, like my daughter did, glue them anywhere! 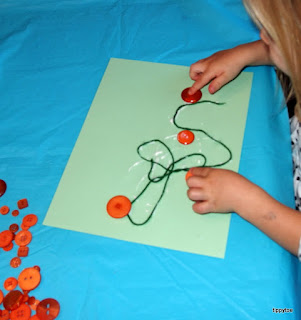 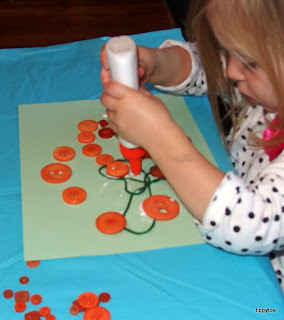 After it dried, I realized it was missing something. Leaves! We added those by scrunching up green tissue paper squares and gluing them randomly on the paper. 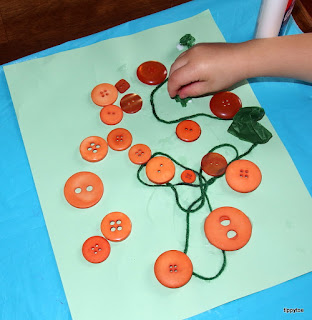 And there you have it, a button pumpkin patch! 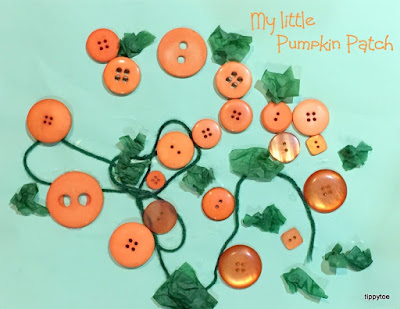 Fall crafts are my absolute favorite. The colors are so beautiful. I've been wanting to make a fall tree with buttons for awhile now, but I couldn't find a big, inexpensive bag of fall-colored buttons. You'd think it would be easy, right? So I eventually broke down and bought single bags of buttons in five different colors. I love button art, so I know I'll be able to use them for many other crafts. I had planned on painting a tree, but then I found this pack of foam trees at Target: 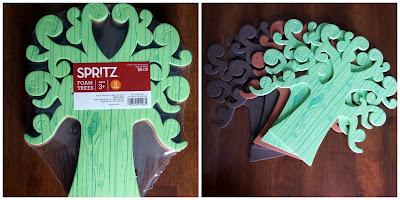 I loved how whimsical they were. So I let my daughter pick which tree she wanted to use and I glued it to a piece of 12x12 blue scrapbook paper. Then I combined a bunch of buttons in a container. She put some glue on the tree and the paper and started adding buttons. She loved this activity! 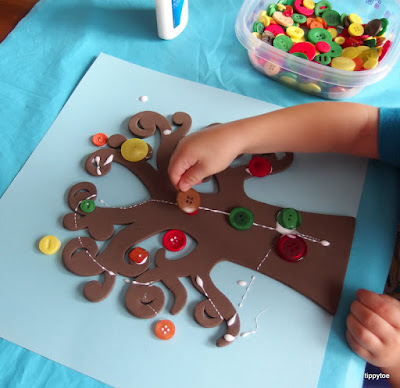 I thought she might get bored after awhile so I had planned on leaving it out for her to come back to later in the day, but she kept on going until it was all filled! 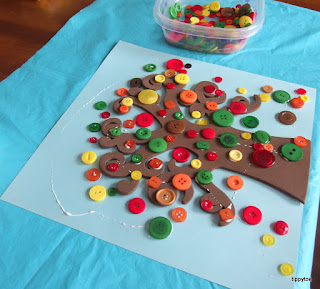 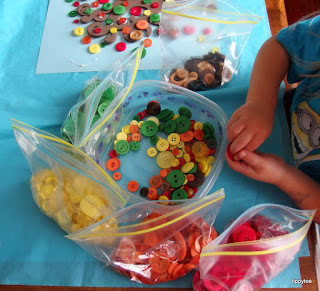 When it was all dry, we had a beautiful fall tree! 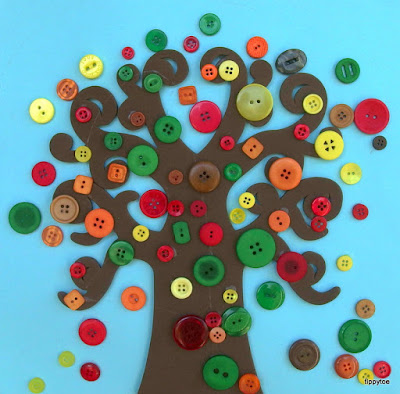 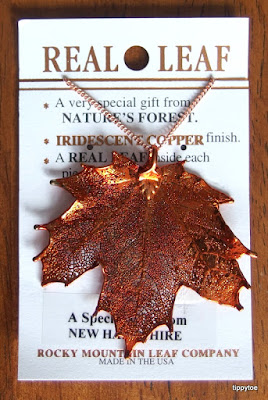 It's a real leaf with a copper finish. He knew I probably wouldn't wear it because it was so big, but he also knew I could do something with it. So I bought a rustic frame, took the leaf off the chain, added a couple glue dots, and I had a beautiful fall decoration to add to my collection! 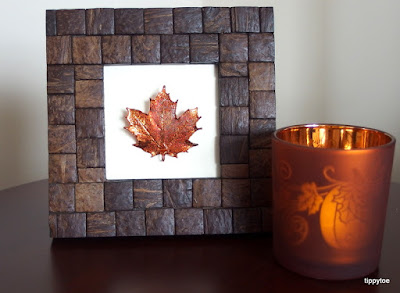 I left the glass out of the frame and glued it to a piece of card stock paper. I wasn't sure if glue dots would work, but it's still holding on a few days later. I love it!
Posted by Betsy at 9:05 PM No comments: