This is a craft from last year. I got the idea from Kaboose, where they made lollipops into vampires. They are very cute, but I decided to do things a little differently. I used craft foam to make circles for the heads and I taped a colored popsicle stick to the back of it. I also used black sticky foam to make hair. 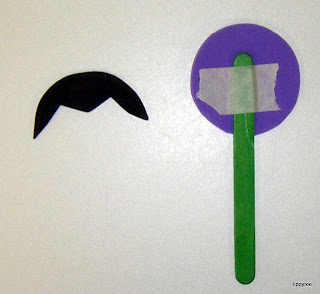 I just used the same size circle for the top of the hair and cut some points into it. I only used sticky-back foam because I already had that on hand, but I was so glad we ended up using it and I'll tell you why later. I also used a standard hole punch to make noses out of the colored foam and cut small triangles out of white foam for the fangs. I set out colored wiggle eyes and black markers. The kids glued everything on the head. Before they glued the teeth, however, they used the black marker to draw the mouth. 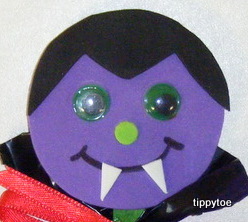 I also cut up black garbage bags for the capes. What a pain that was! Do you have any idea how hard it is to cut slippery garbage bags?! Kaboose used black felt, so I think I will try that next time. But here is how I did it. I cut a rectangle about the same size as the vampire head-on-a-stick. Then I cut out two triangles on the sides. Here's my pattern: 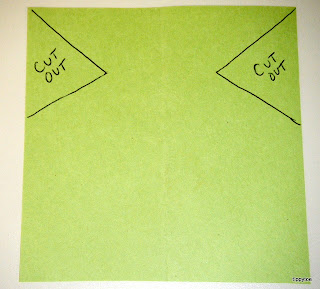 With those two triangles cut out, it gave the cape a nice collar. Then the kids picked out a colored ribbon (I offered black, orange, and red) and I used that to hold the cape on. I just tied a bow around the "neck." I think I also used a small drop of glue under the knot of the bow to keep it from slipping off. 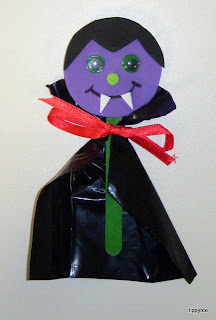 That's mine. Yawn. Now check out the kids'. 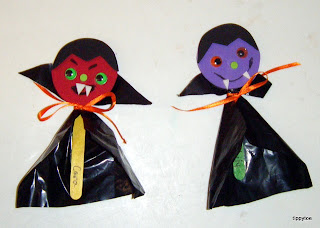 So cute! And such personality! For my display, I used stencils to spell "We Are Fangtastic" in red letters, but I added some blood drips to each letter. 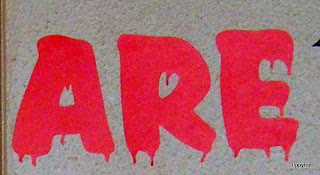 When I went to staple the vampires to the wall, I just peeled back the hair, put the staple in, and put the hair back in place. It worked great! Usually when you put a staple into craft foam, the indent stays behind even after the staple is removed. So this way I was able to hide the staple, therefore hiding the dent. I wouldn't have been able to do that if the kids used glue to put the hair on. 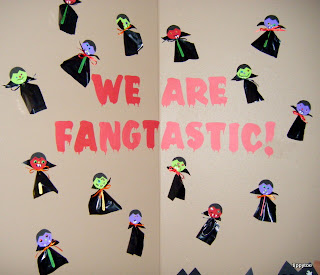 Man, those little vampires were so adorable!
Posted by Betsy at 9:28 PM

If only I have seen this blog earlier, I could have let the kids do this for their crafts subject. oh well, reserved for next year.