I wanted to show you some ornaments I made for my mother-in-law. I don't think she reads this, so I should be safe. (Sherry, if you are reading this, stop please!) I had a few glass ball ornaments from last year, and I had a ton of little odds-n-ends in my craft box, so I decided to put 2 and 2 together. The hard part was coming up with ideas that actually worked, because lots of my little things didn't fit through the neck of the ornament, which was a major bummer. But I'm happy with those that did work out. The first one has a small tree, stuck to the bottom with a pop-up glue dot, and some white glitter for snow. I tied a bow at the top. 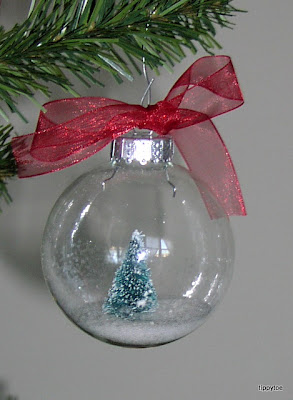 Another one I filled with fake snow and wrote "joy" in glittery self-adhesive letters. This one has a flat front. 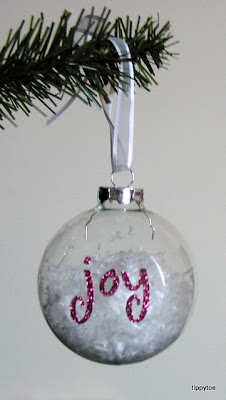 The third one has pine branches, red berries, and a small pine cone inside. 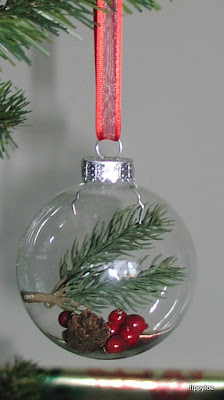 And the last one was filled with white glitter again, and had jingle bells hanging down. I also added a wreath to the flat front. 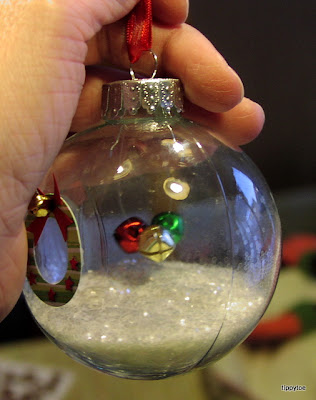 Each of these ornaments took less than 2 minutes to make, and most of it was "free" (things I already had), but what took the longest was deciding on what to do. This was my work space: 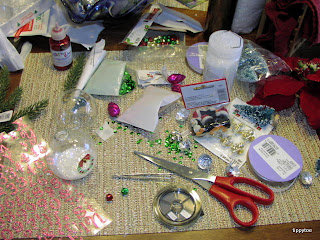 Not fun. I walked away several times because I was getting frustrated when something I wanted to do wasn't working. But I'm glad that I kept coming back because I really like the four ornaments that came to be. I hope Sherry does, too.

**Linking up to Wow Me Wednesday and Bowdabra's Saturday Showcase!**
Posted by Betsy at 10:17 PM

Email ThisBlogThis!Share to TwitterShare to FacebookShare to Pinterest
Labels: Young-at-Heart

I will have to remember this for next year for the kids grandparents. They might be able to make one with their school picture in it!
Is this your homemade gift? I would like it!

Those are so cute!! I never would have thought to do this. I may have to try. Your MIL is lucky she gets these cute homemade things!

Love the glass ball with sprig of spruce and pine cone inside - looks like it took a lot of work to complete! Well done!