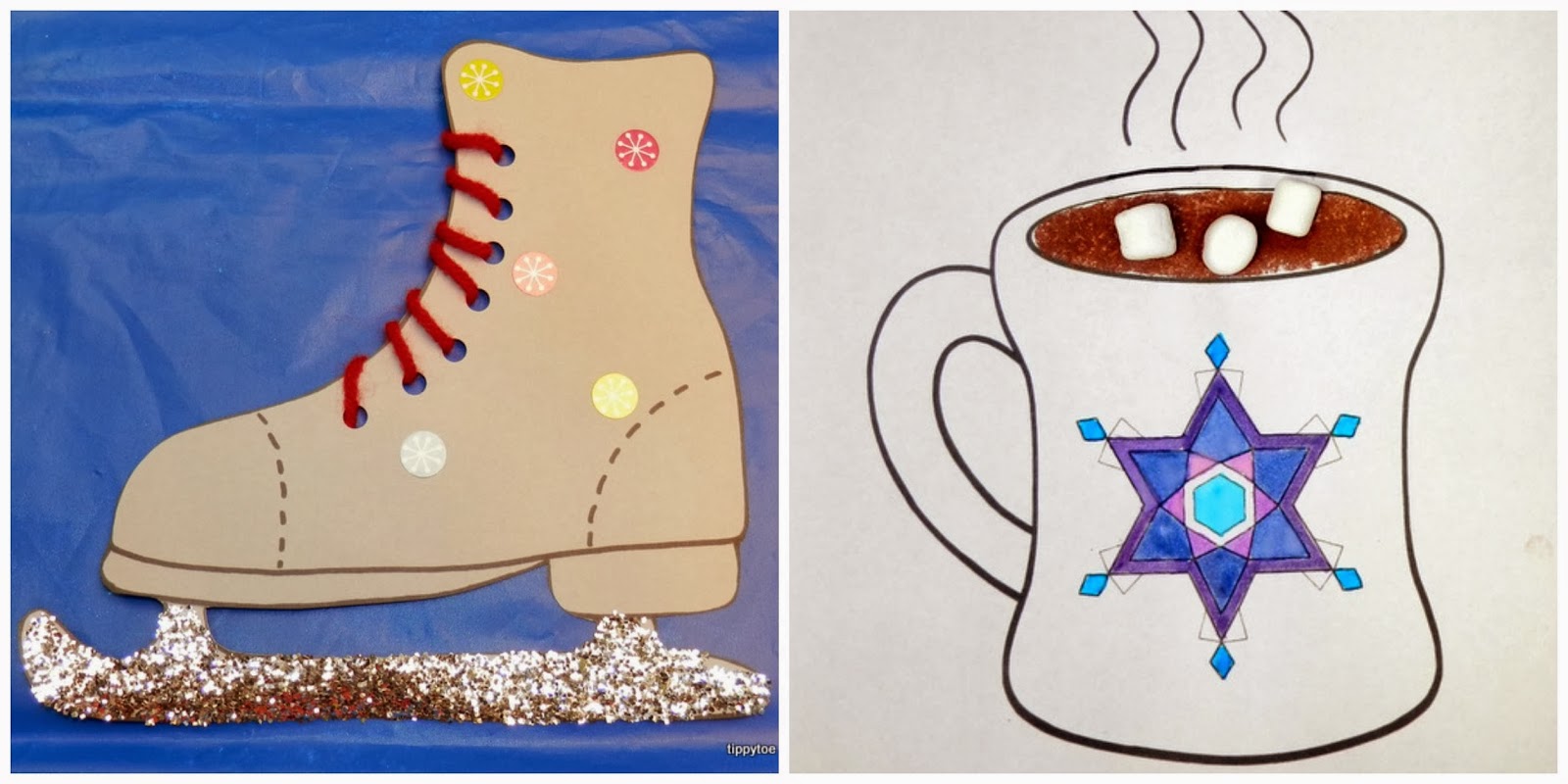 We are discussing the winter season this week and we did a couple crafts that were short-n-sweet, so I thought I'd combine them in one post. Today we made ice skates! I found a coloring sheet for an ice skate (here) through a google image search. I liked the skate, but didn't want the laces so after printing it out, I put another piece of paper on top and traced it, leaving off the laces but making dots where the holes should be. Then I copied that onto different colored card stock. 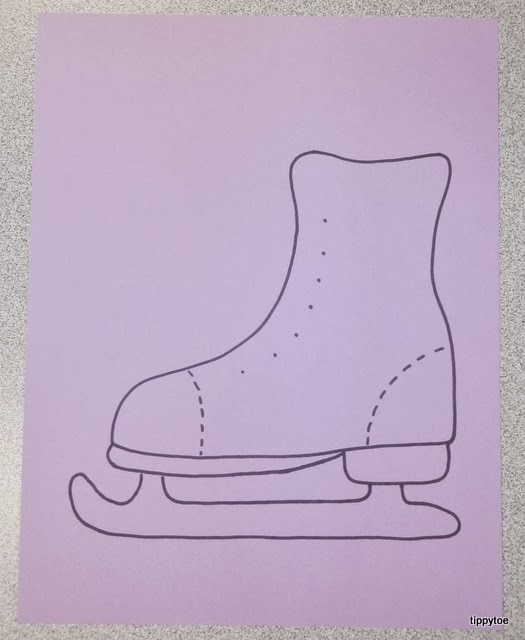 I cut them out and used a punch to put holes on the dots. First, the kids decorated their skate with snowflake stickers and markers. 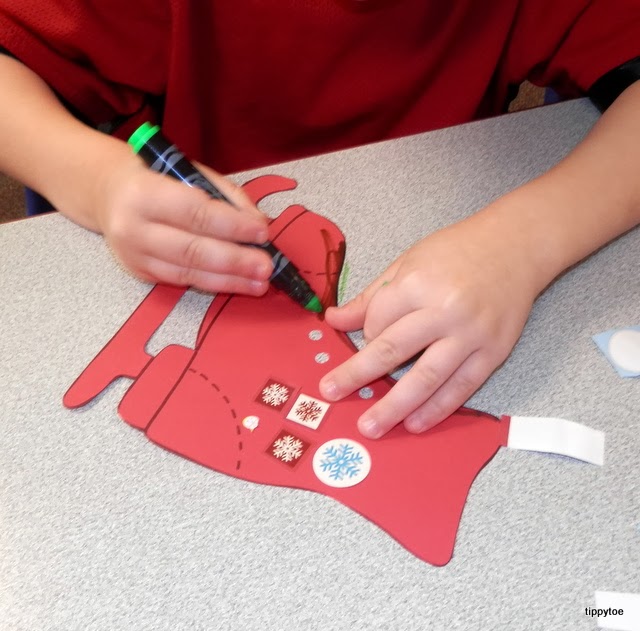 Then they picked a color of yarn and "laced" their skate! 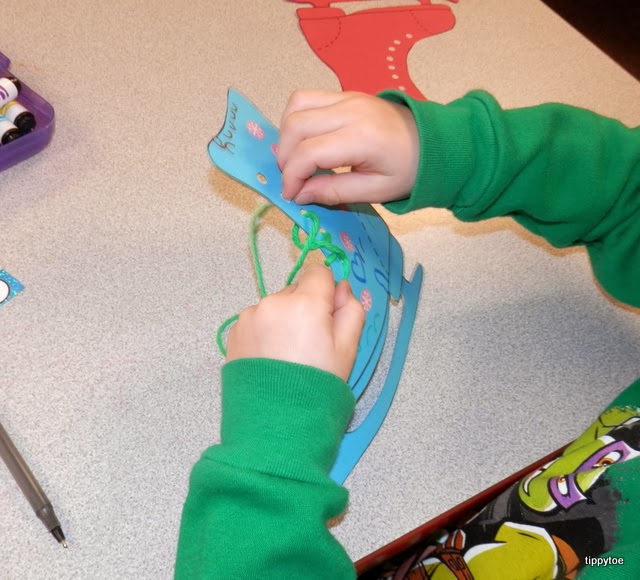 I taped it to the back to secure it before they started lacing. I also wrapped the other end of the yarn in tape to make it easier to fit in the holes. They always put the string through the hole from the back. Correction: that's the way I showed them how to do it and suggested they do it that way as well, but some didn't. No big deal. They were still getting fine motor practice out of it! Anyway, I again secured the end of the string to the back with tape. 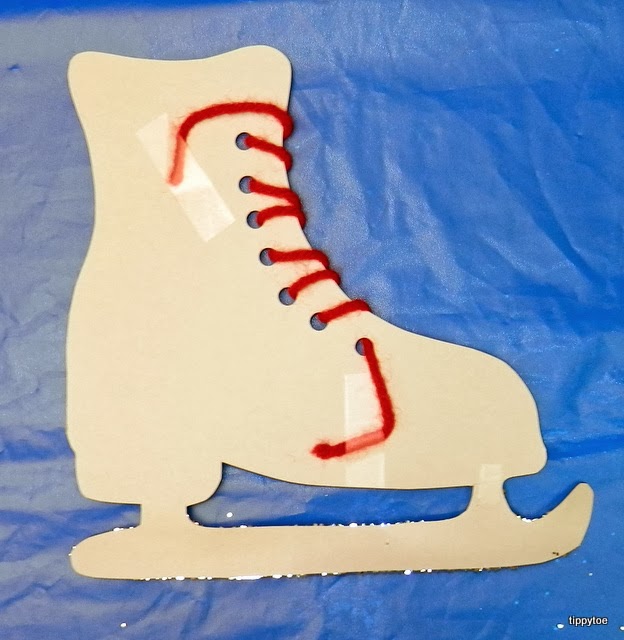 Then the kids put the skate in a box and used a paintbrush to apply glue to the blade of the skate. 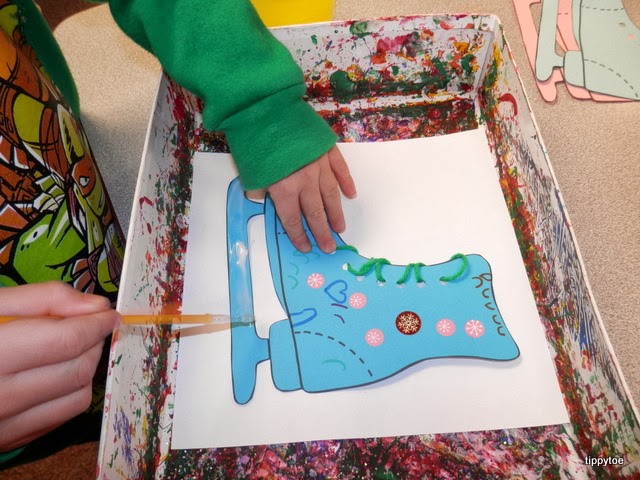 And finally they sprinkled on silver glitter. 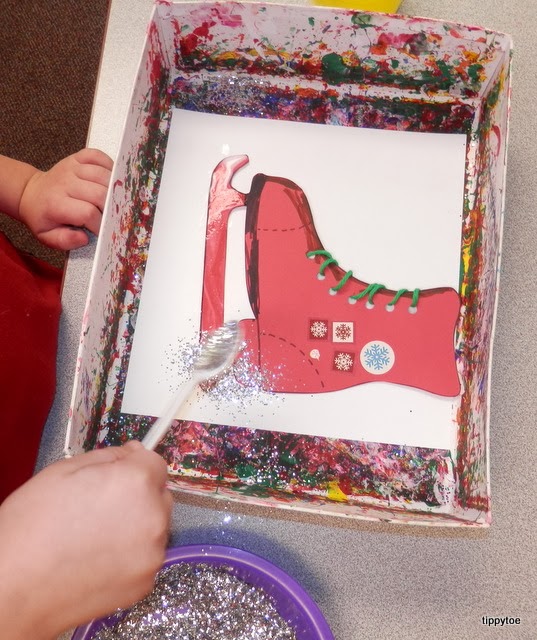 We did this in a marble-painting box to contain the glitter. It worked great! 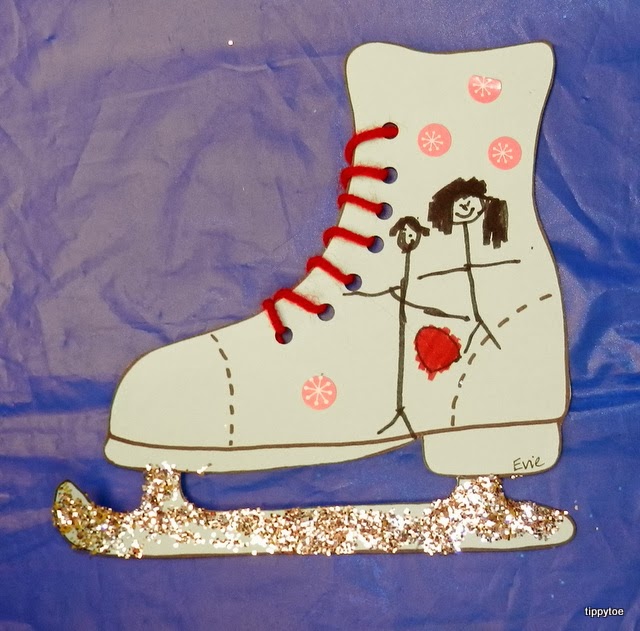 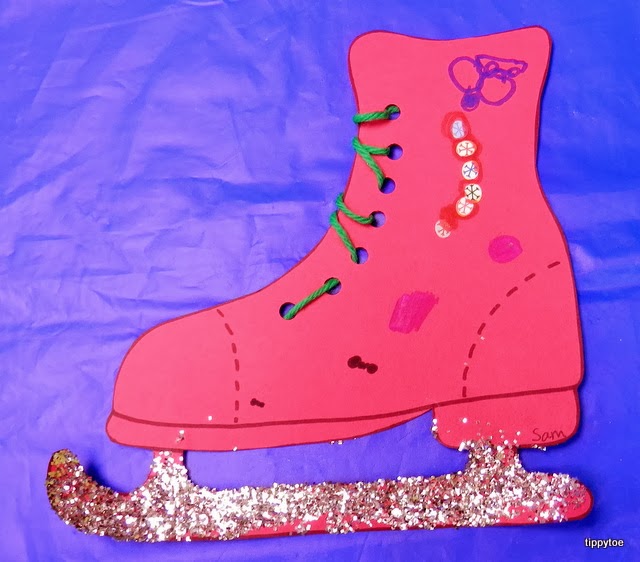 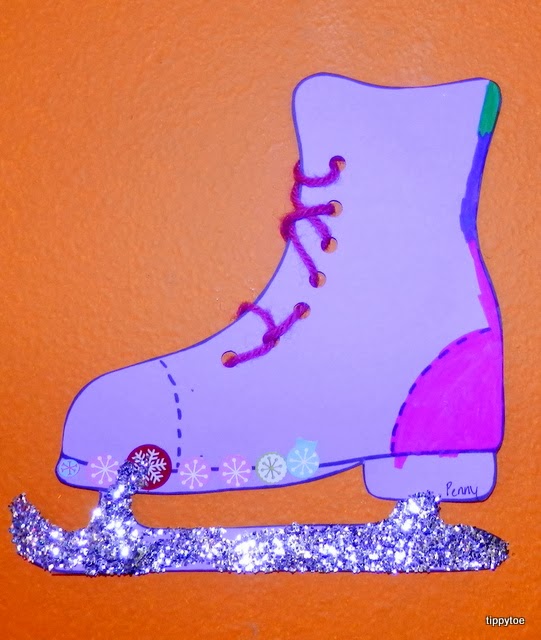 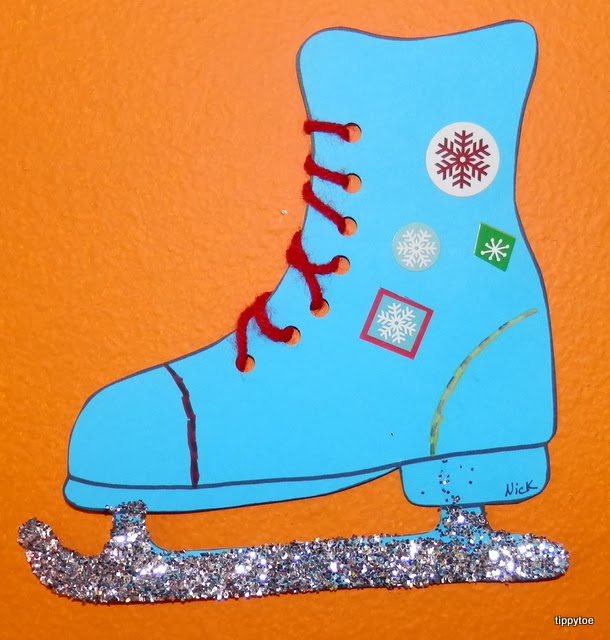 I found this ice skate poem at Frankly Creative, but I changed the first line:
These are the ice skates
I wear on my feet
to glide on the ice
then fall on my seat!
I printed it out and displayed the ice skates around it. 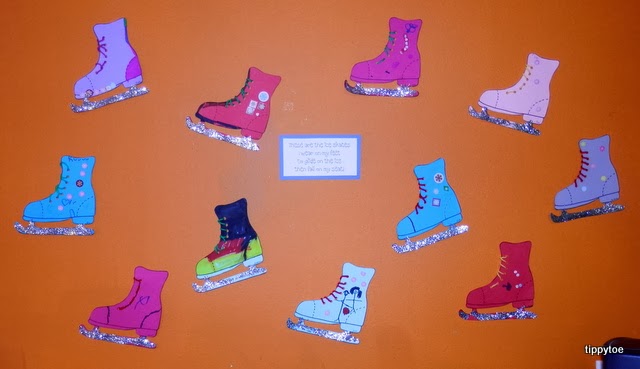 And now for the cocoa. I found a coloring sheet of a mug of hot chocolate. I didn't want the marshmallows, so I used white-out to get rid of them before photocopying them. The kids used watercolors to paint the mug. 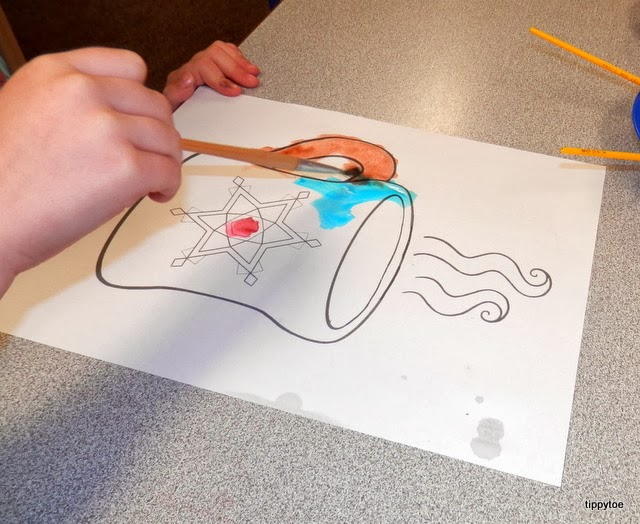 Then they used a paintbrush to apply glue to the inside of the mug (at the top). 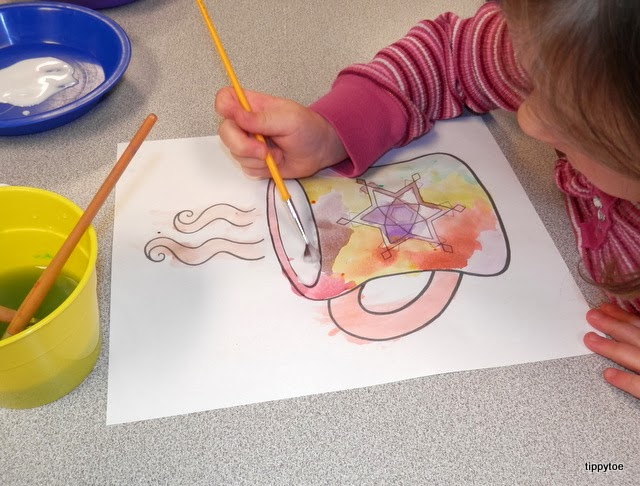 And then they sprinkled on hot chocolate powder. 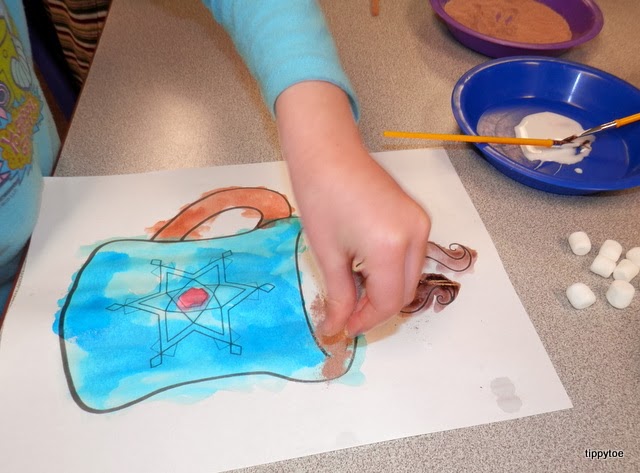 After shaking off the extra powder, they added mini-marshmallows by dipping them into the glue and sticking them right on top of the powder. 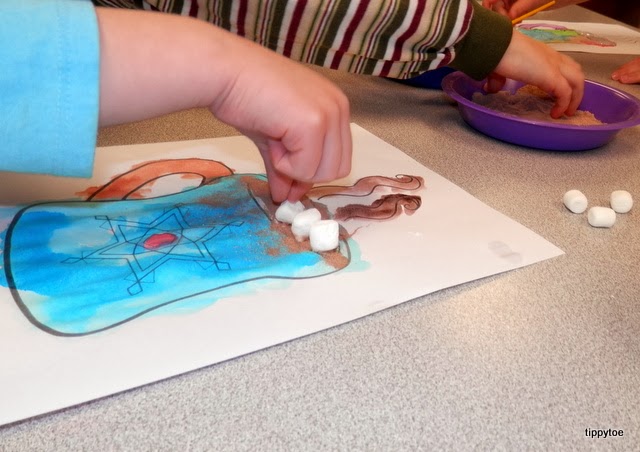 It was a quick project that ended up smelling so good! 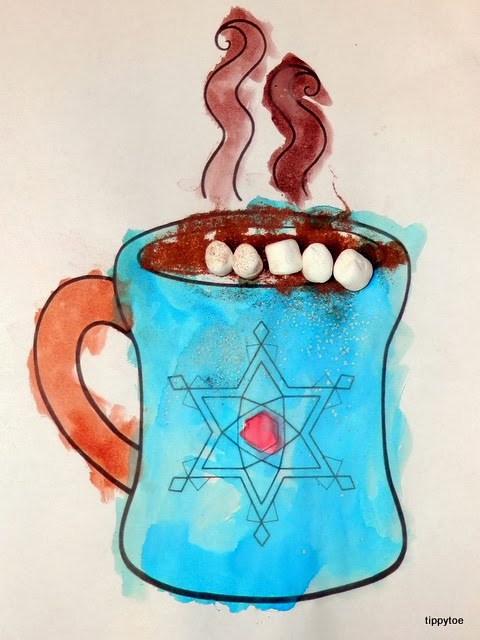 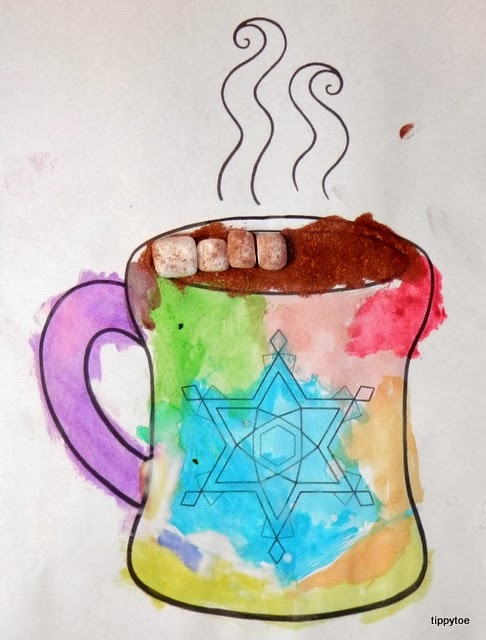 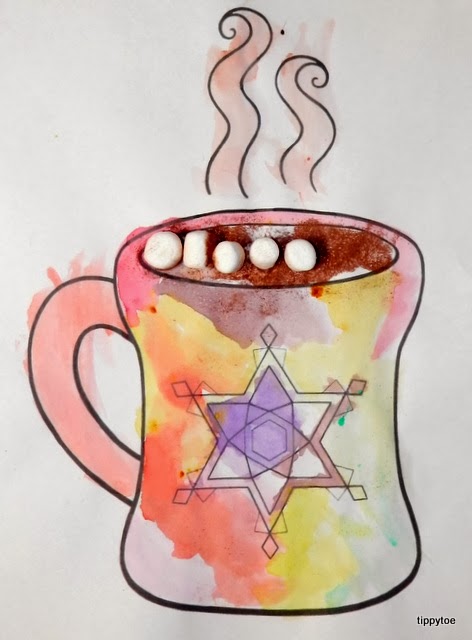